Recently, I decided that I needed some exercise for my abs. I just kept my eyes open and came across something close, related to core muscles. Well, who doesn’t, actually, need a better-trained core. It’s not just ego-boosting, it improves a couple of health issues related to the spine as well as posture problems. Like many people, I sit a lot, and so this should definitely help.

Enough introduction. I found therunningbug‘s 30-day core challenge. While I first wanted and sort-of-expected a training scheme, this is, indeed, rather a challenge. Well yes, the name does suggest it, but it sounded just like a training program in the beginning, and somehow, it is probably both.

It includes three sets of Plank, Russian Twists, and Mountain Climbers (see the above link for details) with per-day-increasing duration. The thirty days include rest days (thankfully), but basically it’s a steep climb. Already at the beginning I felt like this wasn’t going to last very long. But then, I found that I was holding up, although it felt barely manageable a couple of times and I expected to fail the next day. 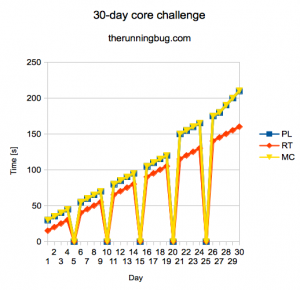 Already rather early on, I decided to plot the whole thing in order to get a better idea of what I was doing. Here is the plot. Yes, exactly, two of the curves (PL and MC) lie on top of each other. At the moment, I am in the third valley on day 15 (yes a rest day 🙂 ). One can clearly see the rest days and that the whole thing basically rises linearly in duration for each set. However, there are a few rather interesting and equally challenging features about this:

As I said, already so far, there were some days on which failure was close, like yesterday (day 14), and I am curious how day 16 will go. This adventure has placed me in an interesting Schrödinger’s-cat state, where tomorrow is a superposition of success and failure and I feel that both are equally likely. I’ll get back here and post updates to let you know to which state my quantum-mechanical 30-day-core-challenge wave function was reduced.

Continuing on the challenge path

This challenge is fun for me, since it keeps really challenging me every day, but so far, I have been able to stay in. I wonder who specifically created this (I’ll try to find out) … Also, for the moment I am speculating why it is structured the way it is.

The challenge must be designed to be tough at some point for people at all sorts of fitness levels. I think I am a person with average fitness, which may be the kind of fitness level that the first 19 days are aimed at challenging, but not failing. A below-average-fit person would probably have found the amount of linear progress over this first period too much and would have had to abort and restart somehow at some day below 20.

Is it a training program or a challenge? 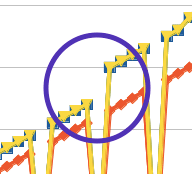 If this assumption is correct, then the next feature of the progression of the exercises should be designed to fail me, the average-fit person. In the figure above, I can clearly see this feature, and I highlight it again here for easy reference. It is an additional 20-second increment over the fourth rest day, day 20, for the Plank and the Mountain Climbers. The standard increment after a rest day is 10 seconds, so in this case, there will be half a minute more for these two exercises after the upcoming rest day. So, even if I can hold up until day 20, day 21 will be heavy.  And should I still be able to deal with that and stay in the challenge, the next feature isn’t far away.

So for those people not failed by the bonus 20-second increment and the subsequent standard increment of 5 seconds over a couple of days, there is another challenge coming up that I’ve mentioned above and highlight here again. From day 28 on, the standard increment is doubled to 10 seconds per day for both the Plank and the Mountain Climbers. So that’s probably the feature of the challenge that should fail most people, except athletes.

Well, there is one more thing. If I do manage to complete the challenge, I will certainly restart it and perform Russian Twists and and Mountain Climbers with maximum intensity. Right now, I feel like I need to pick a pace for “survival”, and also if I fail before the end, I’ll restart with higher intensity.

So, overall, I am still happy, engaged, and curious. I’ll keep posting progress (or restart, in case that happens).

Ok, my first attempt at the challenge was messed up by a travel week. I managed to get to Day 21, but then went on a trip to Spain and never found the time nor strength to even attempt the day’s challenge sets. That’s a bummer, but after my return and after getting myself together, I restarted the challenge from day 1 yesterday. Before doing that, I rewatched the instruction videos linked on the 30-day core challenge site to make sure I get it right and work at the proper intensity.

While, like I mentioned above, last time I ended up in sort of a “survival mode”, i.e. completing the exercise, but not at maximum speed/power/whatever just to reach the desired durations, this time, I’ll give it a solid punch. I was able to stick to this approach yesterday and today and I can feel the improvement of my core over the previous starting phase.

This attempt at the challenge will be better, but maybe also shorter than the previous one. Full intensity or failure. I’ll get back here and post progress soon.

This was messed up again by more travelling and the resulting inconsequence. That’s bad, but I’ll do it again with better planning in the sense that there should be nothing foreseeable to disrupt my effort.