Recently, I wrote a post about swallows building a nest on our balcony. In the meantime, the nest is finished and they are apparently breeding in there (or whatever the correct term for it is, when swallows lay eggs and then take care of them). 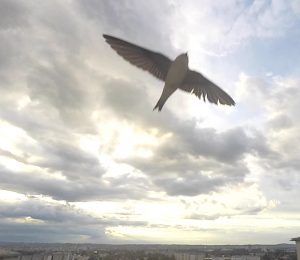 It is time to post again, also because I have captured some new close-up video clips of them flying to and from and around the nest. Actually, for a little while it looked like they were going to build another nest in the opposite corner of the balcony, but they may have stopped doing that. During these days, the flying was intense with several birds appearing and stunt-flying at the same time essentially right in front of or even inside the loggia (since that’s what it actually is).

The swallows are back. With more stunt-action flying.

Here is an impression of them flying in and out at that time.

As it appears, they are common house martins (Mehlschwalben in German). That is pretty common around here and, since we brought up the topic in our family, we know that swallows are also staying in some of their places. 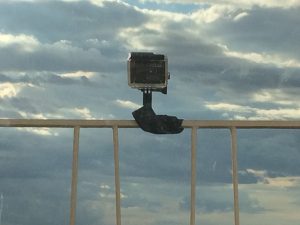 This morning I decided to put the GoPro out on the handrail and capture a time lapse of the clouds moving by. I checked carefully for birds peeking out of the entrance to the nest, but saw nothing. So I mounted the camera using the arm-strap and  may have stirred them up. After I was done and went back inside, they started flying back and forth a little to check, and then came back. They ended up passing right in front of the GoPro a few times and here is the result. Enjoy.

I’ll get back here and post more, as the opportunities arise.